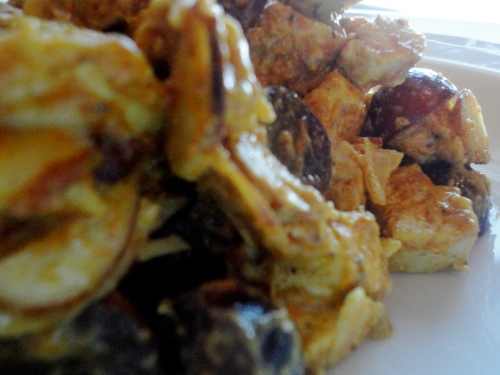 I don’t really eat meat. If you put it in front of me, like most food, I’ll probably eat it. But if I have choice I usually take a pass. So if I don’t really eat meat naturally I cook meat almost never. (You may have noticed the lack of meat anything in my previous posts…). This week was an exception. Obviously.

Two Sundays ago I went to tea with my sorority. Yes, I am in a sorority. No, we are not all stick thin blondes who avoid anything that appears to contain a calorie. However, when we arrived at tea we feigned British manners. We sat, legs crossed, at white linen covered tables conversing while waiting for everyone to enter the venue. That lasted for all of 15 seconds when the seniors made a beeline for the food. Game over. Eat on.

In addition to the traditional cucumber sandwiches and biscotti was absolutely delicious curried chicken salad tucked between two pieces of fresh white bread. It was good. Really good. So good, in fact, that when I got home I immediately went to my computer to search for a recipe. A week later I finally got around to bringing the recipe in to the kitchen. And let me tell you, for someone who doesn’t eat meat, I’ve eaten a lot of this in the past two days. I think it has something to do with the combination of spicy and sweet and those grapes, which add that extra layer of flavor. Dig in.

I highly recommend letting this chicken salad sit in the fridge overnight before serving. Letting it rest really allows the flavors to meld, making it…I would say…ten billion times better. Also, keep in mind, chicken salad can be served on its own, as a sandwich, or over lettuce. Chicken salad salad anyone?

Put 8 cups of water and 3 tablespoons of salt in a large bowl. Place chicken breasts in the water and salt mixture. Refrigerate for 1 to 2 hours.

Take chicken from the refrigerator. In a large sauce pan boil two cups of water. Rinse each chicken breast and place in the boiling water. Reduce the heat, cover, and cook for 12 to 15 minutes. Remove chicken from the water and place on a plate. Let cool.

Toast almonds in a 350 degree oven for 6 to 8 minutes or on the stovetop over medium heat. Chop the chicken in to half inch cubes. In a large bowl toss the chicken with olive oil, salt, and pepper to taste. Add almonds, grapes, celery, and red onion.

In a separate bowl combine the mustard, curry powder, paprika, sugar, and yogurt. Mix well. Pour the yogurt mixture over the chicken and stir until chicken is evenly coated. Cover and refrigerate for six to eight hours or overnight.